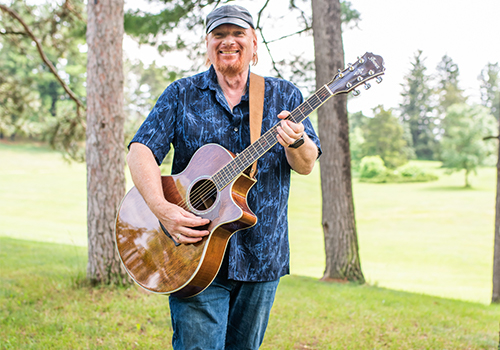 Ed has taught at The Music Center since 2008 and offers specialized instruction on various string instruments, including guitar, bass, ukulele, banjo, and mandolin. His greatest reward is making a breakthrough with a student, allowing their talents to shine, and enriching their life. He adds that learning to play and embracing musical techniques must be exciting and gratifying for everyone. “It has to be fun, or it’s not worth doing.” Picking up the guitar early, Ed credits his love for music to his mother and father, who encouraged him to form his first band at age 12. His first time performing came shortly after that, in 7th grade, at his junior high dance. His parents’ support continued into high school, allowing Ed’s rock band to practice daily in their basement. To this day, Ed’s first love is classic rock, whether it’s the Beatles, Doors, or Rolling Stones, and his favorite guitarists include Jack Bruce, Leslie West, and Ritchie Blackmore. Ed studied at the Hannibal School of Music and the State University of New York at New Paltz. He co-founded the band Reflection in Syracuse, New York, and played on the East Coast for ten years. Later, Ed expanded his musical repertoire and toured nationally with the Chet Atkins Band. His musical journey continues, and today, Ed plays bass guitar with the Pirates and Wenches, a Renaissance folk-rock band where he is the founder and songwriter. Ed owned a gem-cutting (lapidary) business serving the high-end jewelry business for more than 20 years and enjoys cooking, canoeing, and hiking. He and he and his wife own two corgis, six cats, and two rabbits.
Scroll To Top